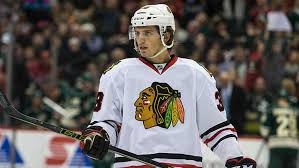 The Nashville Predators aren’t joking around this season. They have acquired forward Ryan Hartman and a 2018 fifth-round pick from the Chicago Blackhawks for forward Victor Ejdsell, a 2018 first-round pick and a 2018 fourth-round pick.

Ryan Hartman has played in 57 games with the Blackhawks so far this season and he scored eight goals and recorded 17 assists. Hartman scored 19 goals and recorded 12 assists in the 2016-2017 season. He will be a restricted free agent at the end of the season.

He is just 23 years old and he is an excellent skater. Hartman will thrive with the Predators and he should get some great looks on offense. He will also provide depth on offense.

As for the player the Blackhawks received, Ejdsell is 22 years old and he was an undrafted free agent. The ironic thing is that the Chicago Blackhawks were actually interested in signing him this summer. In 44 games played with the HV71 Jonkoping in the SweHL, Ejdsell has scored 17 goals and recorded 13 assists so far this season.

Nashville wants to win the Stanley Cup this season. Chicago is looking to rebuild since they most likely won’t make it to the playoffs this season and they are currently 11 points out of a playoff spot.